Previous Next
The Chelation of HEDP Phosphonate in Water Treatment

These organic phosphates have corrosion resistance ability. They have a good synergistic effect with other polymers and zinc salts. In particular, the latter three has a high tolerance to calcium ions and is suitable for high concentration of time. HEDP phosphate has a certain chelating capacity in addition to corrosion inhibition. 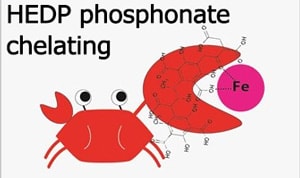 The process by which the central ions are combined with two or more coordination atoms with the same multi-tooth ligands is called chelation. The result of chelation is cationic cation (Ca2+, Mg2+) and chelating agent interacts to produce stable chelate.

This prevents them from reacting with scale anions (such as CO32-, SO42-, PO43- and SiO32-). That greatly reduces the probability of scaling. Chelation is carried out stoichiometrically. For example, an EDTA molecule chelates a divalent metal ion.

In other words, one milligram of chelating agent can only chelate less than 0.5 mg of CaCO3. If it is necessary to stabilize the calcium and magnesium ions with SMM 0FL in the circulating water system, the dosage of chelating agent is 1000 m/L.

Such a large amount of consumption will increase the cost of the enterprise. However, in medium and low hardness water, the chelation of HEDP phosphate still plays an important role.

Because of these organic phosphate sharks, such as HEDP phosphate. HEDP phosphate can also be used as a metal cleaning agent. It should be noted that after the cleaning agent is used, the waste liquid after cleaning also needs to be treated with technology. Take the water system cleaner as an example.

The water quality does not meet the discharge standard because the waste liquid contains grease dirt, mud, carbon deposit, metal chip, and polar oxide. General processing technology can be used for reference to the emulsion wastewater treatment method.

The wastewater treated in three paragraphs can meet the national effluent discharge standard.