Now, you will better understand HEDP and its sodium products here. Two Uses of Organic Phosphonic Acid, HEDP. They are scale Inhibitors and metal cleaning agents. 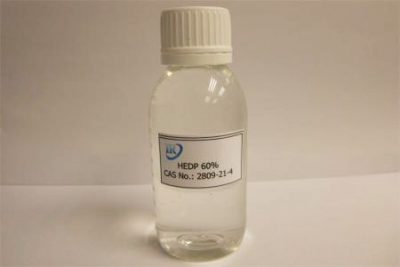 Relying on the current generated during metal corrosion, this complex is deposited on the metal surface. This will hinder the contact of oxygen with metal. In this way, the effect of suppressing corrosion can be achieved.

Therefore, phosphine-based formulations require a certain concentration of calcium ions in water. Other organophosphorus scale inhibitors (such as HEDP, DTPMP) work in the same way.

The zinc salt forms a zinc hydroxide precipitate in the cathode, which suppresses the cathodic reaction and acts as a corrosion inhibitor. The formation of zinc film is fast, but the film is loose and weak. It is usually used with other corrosion inhibitors such as zinc phosphate. Because it deposits tightly on the metal surface as soon as it settles, it is relatively strong and compact.

HEDP acid is a typical metal cleaning agent. HEDP acid has its own acidity and excellent chelating activity. HEDP can chelate, dissolve and disperse special dirt such as oxide layer adhering to the metal surface to achieve the purpose of cleaning.

IROCHEM has a long-term supply of high-quality HEDP and its sodium products.