What are The Prospects of Graphene in Desalination And Water Treatment

What Are the Prospects of Graphene in Desalination and Water Treatment?

In 2017, scientists in Britain and China have used different methods to achieve the control of graphene oxide layer spacing. That makes the smaller the water molecules can pass graphene oxide. And the salt ions are blocked. The results show the great potential of graphene oxide in desalination.

Graphene oxide is the “twin brother” of graphene. Since 2004, British physicists have used the incredible “rip tape” method in the laboratory to extract single-layer graphene from large graphite. Until then, scientists have theorized that single-layer graphene could not be stable. Graphene, the scientific term has become famous in the world. In just over a decade, the research on graphene has developed rapidly. And these studies show wide application range.

The Special Structure of Graphene

Graphene is a member of the “carbon family”. It is a layered material formed by carbon atoms arranged in a plane in the shape of a hexagonal honeycomb structure. Graphene has a thickness of only one carbon atom. That is about 0.34 nanometers. That’s about one in two hundred thousandths of a hair. Graphene is the thinnest material ever found, and it is also known as a two-dimensional material.

And that is twice more than diamond. The mechanical strength of graphene is so great that it is 200 times stronger than steel. If one square meter of single-layer graphene is made into a hammock, it can safely carry a cat. Graphene also has excellent electrical properties, which is more conductive than silver and copper.

Based on the excellent physical properties of graphene, people are very optimistic about its application. Nearly a decade research shows that the graphene has great application potential in many fields. Such as high-frequency electronic devices, flexible display, electrochemical biosensors, new energy battery, supercapacitor, thermally conductive materials, aerospace, and other fields.

For this reason, the graphene is known as “black gold” and “king of the new material”.

In many potential applications, graphene water-purification technology not only has high feasibility in theory. But also has made many breakthroughs in the laboratory. It is well known that the activated carbon, as a common traditional wastewater treatment material, has a lot of pores and has a strong adsorption capacity. Graphene has a special lamellar and porous structure. This makes its adsorption capacity much better than the activated carbon.

On the basis of this special structure, scientists modify the activated carbon. There are many different kinds of graphene-based adsorption materials studied. And all of them have super-efficient adsorption ability. Not only can they absorb pollutants that are hundreds of times their own mass, but they can also be recycled, greatly reducing the cost of use. The graphene offers a new way to wastewater treatment and desalination. 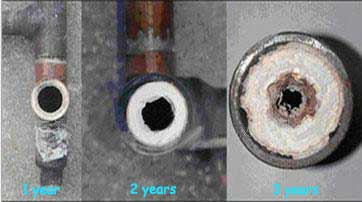 Of course, the relevant equipment should also be good corrosion protection and scale removal work. HEDP is the main corrosion inhibitor in water treatment. It can form stable complexes with various metal ions such as iron, copper, and zinc.

For this reason, HEDP can dissolve oxide on the metal surface. Moreover, the acid and alkali resistance of HEDP is better than another organic phosphonic acid (salt). It can form six ring chelates with metal ions in water, especially calcium ions, so it has a good effect of scale inhibition and obvious solubility effect.

What Are the Prospects of Graphene in Desalination and Water Treatment?